Is a multi-faceted Spanish artist. A professional viol player, Pilar loves music in all its expressions and styles. Through her main instrument, she has specialised in early music, although she has always been open to other traditions, such world music, jazz and even pop. She enjoys the challenge of playing other instruments: violone (bass Baroque instrument), the sraj (indian traditional instrument), or the medieval viol.

Her training encompasses the “classical” conservatory education (Professional Conservatories of Zaragoza and Sevilla; Superior Conservatory of Vigo), a degree in Fine Arts by Seville University, as well as the study of theatre, improvisation and sraj  at the State Music School of Varanasi (India).

Pilar has appeared at many important events, both national and international, and has been part of some of the most prominent Early Music festivals in Spain. In 2017, she worked for the national tour of the bagpipes player Carlos Nuñez, sharing the stage with musicians, such as Jordi Savall, or Dulce Pontes.

Capitalising on her theatre experience, she has participated in other ground‐breaking shows like “Espontangas”--a spontaneous theatre group, conducted by the Argentinian actress Patricia Davis.

She has travelled to many places around the world, always open to new colours and experiences, immersing herself in different cultures and music traditions, in order to enrich herself and grow artistically. In 2013, she received a Fellowship from the International Cooperation Department of Seville University, and was able to remain for more than a month in a Goa orphanage, India,  teaching music and playing at concerts for the Goa University.

In 2014, she received the same Fellowship, and this time she travelled to San José de Chiquitos, Bolivia. There, she taught violoncello and conducted the children’s orchestra at the State Music School. Moreover, she took the opportunity to travel around and visit many countries of South America, learning painting techniques with the Bolivian artist Pablo Ruiz.

In 2015 she travelled back to India, where, for an entire month, she took daily classes of singing and sraj playing at the Varanasi State Music School. In the same year, she also began working with Abdelaziz Samsaoui, director of “Samsaoui Producciones”, who is a Moroccan musician specialised in Arabic early music. Pilar started playing the medieval viol while taking part in Samsaoui’s projects.

In 2016, she recorded her first album, called “Caja de Música”, with her music project “Caranzalem”. Two years later, that album won a runner-up prize from CREAR18 PRICES, in collaboration with the Aragonés de la Juventud institute.

In recent years, Pilar has completed a Bachelor programme at the Vigo Superior Conservatory of Music, where she studied with Sara Ruiz, specialising in advanced viol techniques and Early Music disciplines.

Currently, she is running three personal projects: Almalé, a project in which early music is merged with jazz and folk styles, with the violinist Thomas Kretzschmar and the guitarist Ernesto Cossío; Caranzalem, with the recorder player Elena Escartín, which showcases world music sung and played on early instruments. Finally, “Ceci n’est pas Baroque”, a viola da gamba experimental project with Patricia Rodríguez.

In 2020 she started recording music at her home studio, working with the American composer and harpsichordist William Gamble.

In 2021 she was named soloist viola da gamba player in the Mediterranean Chamber Orchestra, conducted by Carlos Santos.

She regularly performs at concerts, writes her own music, records music at her home studio, and keeps experimenting with her talents, always looking for new sounds and forms of expression.

​2013 Violoncello and music teacher in a Goa Orphanage. Fellowship from the International Cooperation Department of Seville University

​2018 Presence to the conference in Jornada Formativa Musae. Madrid​

2018 Concert in Early Music Festival in Gijón as a musician of "Viajeros Medievales" ensemble. Conducted by Aziz Samsaoui 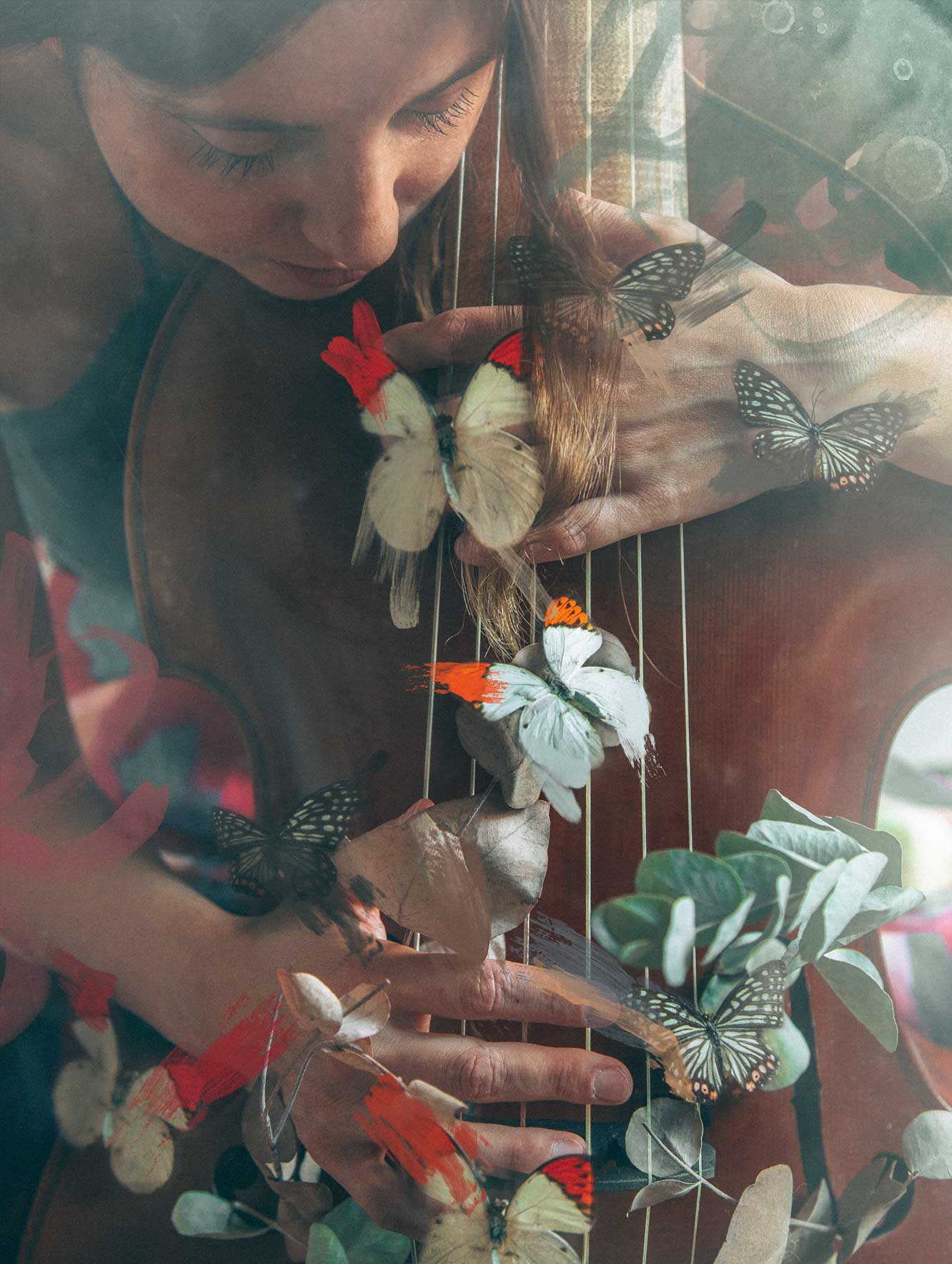